Before I get to this week’s FX Analysis, I want to take a moment to explain the next transition of my life… and the implications it’ll have on the newsletter, my sites and my youtube channel.

As you may or may not recall, I was accepted into the Masters program for Economics at UofT. The program officially starts on Sept 10th, 2012. However, there is a compulsory 3 week intensive math/stats review prior to the start of the semester. This review starts on Monday (Aug 20th), it’s intensive because it’s runs for 6 hours each day. Also because most people took calculus and stats early on in their undergrad (i.e. 3-4 years ago), so I don’t really remember much.

I haven’t had time to review this summer due to various other commitments in my life. Here’s a brief recap for those of you that don’t watch my youtube videos:

The above didn’t give me much room to trade but as you’ll recall, I did trade from time to time. I’ve attached 2 screenshots of my 24Option account showing the trades I made since June 26th (the day after my last ‘Live Trade’ post). For those that have seen my trades in the past, I normally do excel spreadsheet with comments and annotated charts but I don’t have them. I just made these trades randomly when I had time to login during the past couple months so I wasn’t fully documenting it all. So I apologize if the screenshot is “teasing” you compared to what I normally post for trade transparency but I figured a screenshot would be best to prove that I haven’t been actively trading. 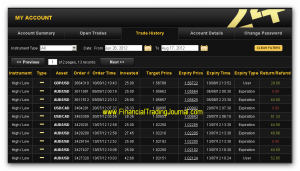 I will be taking a leave of absence for the duration of my math/stats review. During this time, I will not be doing any FX Weekly Analysis, as you’ll see below, the upcoming 3 weeks have dashes inside them indicating the lack of forecasts. Since the math/stats review runs 6 hours everyday, I doubt I’ll be trading… although in the past, it’s usually when I study that I feel the urge to procrastinate and trade instead. Lastly,  given that I have more subscribers on youtube than I do on the newsletter/blog, I prioritize my youtube videos above everything else. Thus, if I have time (and that’s a big IF) then I will try to produce a few videos over the span of the next 3 weeks.

Once the math/stats review ends and the semester officially starts, I will have more time to spare and will resume the normal schedule unless something else happens in my life. The reason being is because I opted for part-time studies instead of full-time. Given my background in economics in combination with what I’ve learned in finance, I really don’t think the job market is ready for me. Plus, the Canadian housing market is about to crash soon as well so I doubt things are going to be good in Canada for the next couple years. Thus, I want to delay my graduation for as long as possible.

That’s it about my life, let’s get on with this week’s FX Analysis.

Overall, a weird week yet again and as noted above, I’m not making forecasts for the next 3 weeks, so there won’t be any commentary. Just count 18 daily candles and I’ll be back before you know it. Thus, I drew the projected path on the daily chart instead of the H4 chart since this will last longer (I hope). 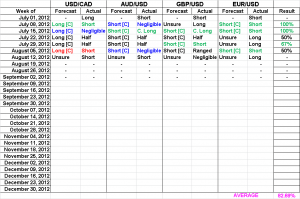 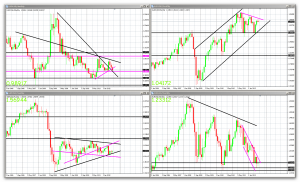 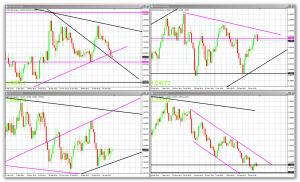 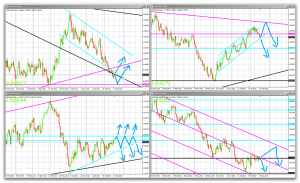 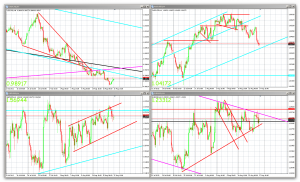 As noted above, the projected paths are drawn on the daily chart as this is where I see the markets going in the next couple weeks. Couple things to point out, ascending triangle on GBP/USD H4 chart, symmetrical triangle on EUR/USD H4 chart, AUD/USD at the edge of the upward channel and I have nothing to comment on the USD/CAD.