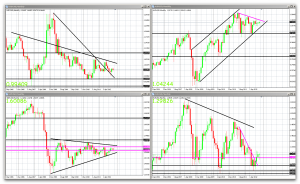 As I mentioned last week, last week was the last FX Weekly Analysis for the year. So today will simply have a summary / closing remark type post to end off Year 2012 FX Weekly Analysis. I’ll start by posting the 4 charts to conclude what happened this week in the markets to end off the forecasts properly then I’ll summarize the results from this year and what’s to come in the new year. 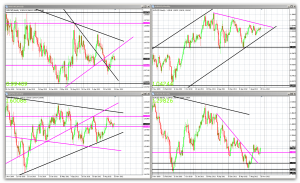 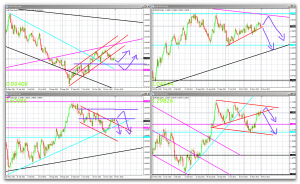 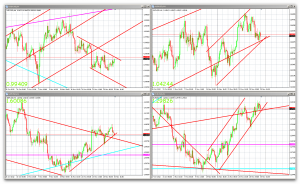 What happened this week in the markets is exactly why I don’t like forecasting or even trading during this time of year. Given the holiday season: liquidity drops, volume drops, price action sucks and we’re left with ranging markets. From looking at the H4 chart, it looks like the markets “moved” and yes they did, they moved up and down by 20-30 pips!

That’s why as you’ll see in the spreadsheet below to conclude last week’s FX Weekly Analysis, all of the forecasts ended up being negligible because nothing happened. Markets ended off the week around the same area as when we started on Sunday!

Also worth mentioning, I added some of the projected paths (from last week) on the daily chart for what I think might happen in December or January. It’ll probably take a whole month or two to move the projected 100-200 pips. For the full projected paths, refer to last week’s FX Weekly Analysis (November 24th) to see them on the daily chart there: http://www.financialtradingjournal.com/november-24th-2012-fx-weekly-analysis/. 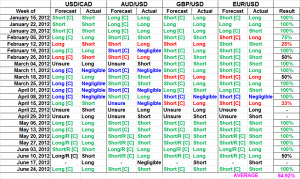 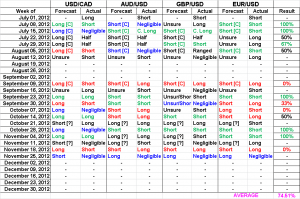 Note: The average you see on both spreadsheets are cumulative up to the latest date on that spreadsheet.

So the first spreadsheet shows an average of 84.92% for the first half of year 2012, you’ll see that I made forecasts for the majority of the weeks with the exception of 3 weeks.

Coincidentally, if you go search my archives back to my end of Year 2011 summary: http://www.financialtradingjournal.com/end-of-year-summary-year-2011/. You’ll notice in the FX Weekly Analysis spreadsheet there, I ended up with 65% for the latter half of last year as well…. Weird, maybe I just suck at forecasting during the second half of the year.

Overall speaking, I’m content with my progress so far comparing what I know now to what I knew last year. Hopefully you guys (my readers) have improved as well either on your own or with the help of my forecasts/videos.

Last year and even this year, something I do from time to time is attribute factors for failure. I won’t bother to do that this year, there’s no point in doing so. I know the problems that occurred (mostly personal, since the past 6 months have been a hectic time in my life, transitioning out of school isn’t as fun as I thought) and I’ve dealt with most of them already.

So here are things to look forward to in the new year:

Until the new year, trade safe (if you still are) and hope you all have a safe and happy holiday!