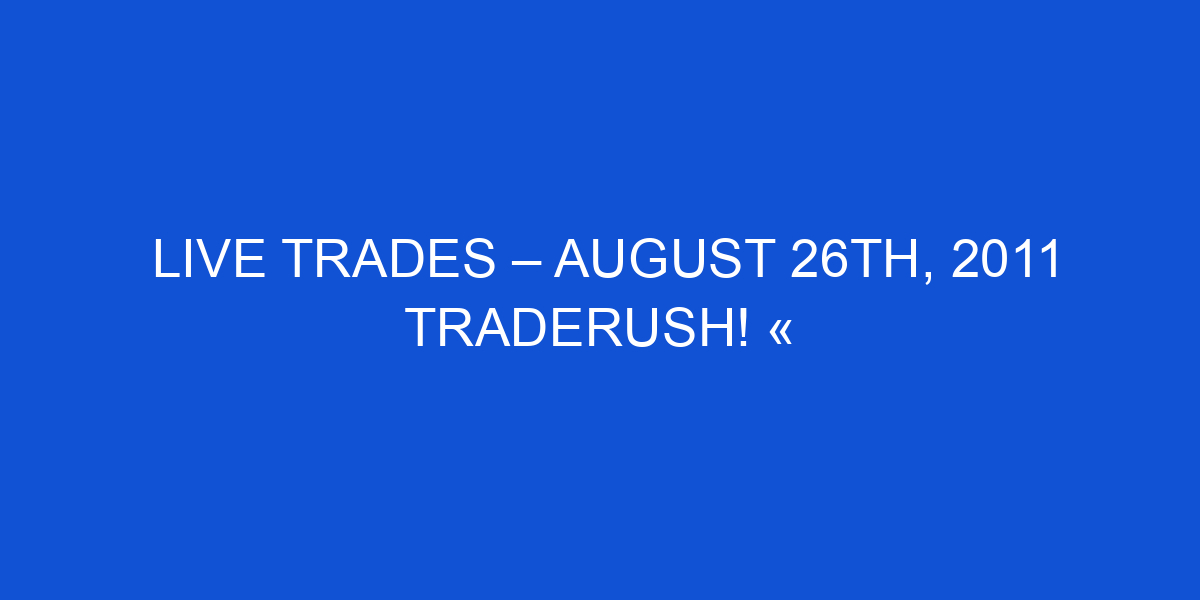 TradeRush! They picked the right name for themselves, because the feeling you get when you trade these (or at least for me) is exhilarating, heart rate increased so fast. Man, these 60 second trades are like instant gratification/dissatifaction. Enter the trade, and 60 seconds later, you’re like YES! or WTF? or DAMN!… If you haven’t already checked it out, you should definitely give it a look see…

I don’t plan to post any charts for these trades today. I tried to employ the same strategy as yesteday, but it didn’t end up working my favor today. Ended up overtrading a lot, and I blame myself for the most part, lack of self control = leading to gambling i.e. overtrading, aka walk away asap, but I didn’t and ended up in the red. Before I get to the trades for today, I just want to take some time to go over the platform problems that I had today with them. Somethings that I did not notice yesterday when I traded. Yesterday’s post, I listed all the flaws that I could spot, aside from those, I was more than happy about the platform. I find it quite ironic, I was speaking with a few other traders last night (they profited yesterday as well), we were talking about TradeRush potentially screwing us over after we started to profit.

Problems during the morning trading session

1. First and foremost, the biggest problem by any binary option broker is spreads! I didn’t notice any yesterday, prices were mostly spot on yesterday when I traded. Today, spreads happened in various places.

2. Trade delays, I’m not alone on this, I was chatting with someone on trading forum. He noticed trade delays as well. From what he’s disclosed, he has super fast internet (apparently 1 Gbps, which I didn’t know was possible..). But regardless, I myself, have 6 Mbps (I download @ 600 kbps), this is more than enough internet speed to trade properly.

After trading like 54 gambling trades, I had to go out. When I came back in the afternoon, I tried to trade again and guess what? Shockingly, no trade delays, spreads were still a bit iffy though. The Call/Put options didn’t vary in price but the price itself still spread a little compared to FSC/Oanda.

My conclusion? A few explainations for the weird morning activity.

Out of 3 trading sessions (today was morning and afternoon), this has happened once. I will continue to trade with them next week to see how it is. After I reach 250+ trades,or 25 hrs of trading total, whichever comes first. I will write up an official broker review as I have done in the past for the other brokers that I’ve used. I’m not going to let 1 bad session stain their reputation for now, and neither should you. For those of you waiting to pull the trigger on this broker. You can either just go ahead and join to start trading and judging yourselves, or wait for me to test out their platform the next whole week and/or wait for my complete broker review.

Something I just remembered right now, I don’t recall seeing many of those error messages that I saw yesterday. That may or may not be a contribution to the problems today, not entirely sure.

Also, an update on one of the flaws posted yesterday with no trade history scrolling. I’ve been told the problem has been forwarded to their tech team and should be resolved next week. I surely fucking hope so! Because typing out the trades today was a bitch, luckily, I managed to save 10 trades from early on and at the end, so only had to type 37.. which is still a lot. But I do it for the blog to be consistent, and to keep updating you guys with my trades.