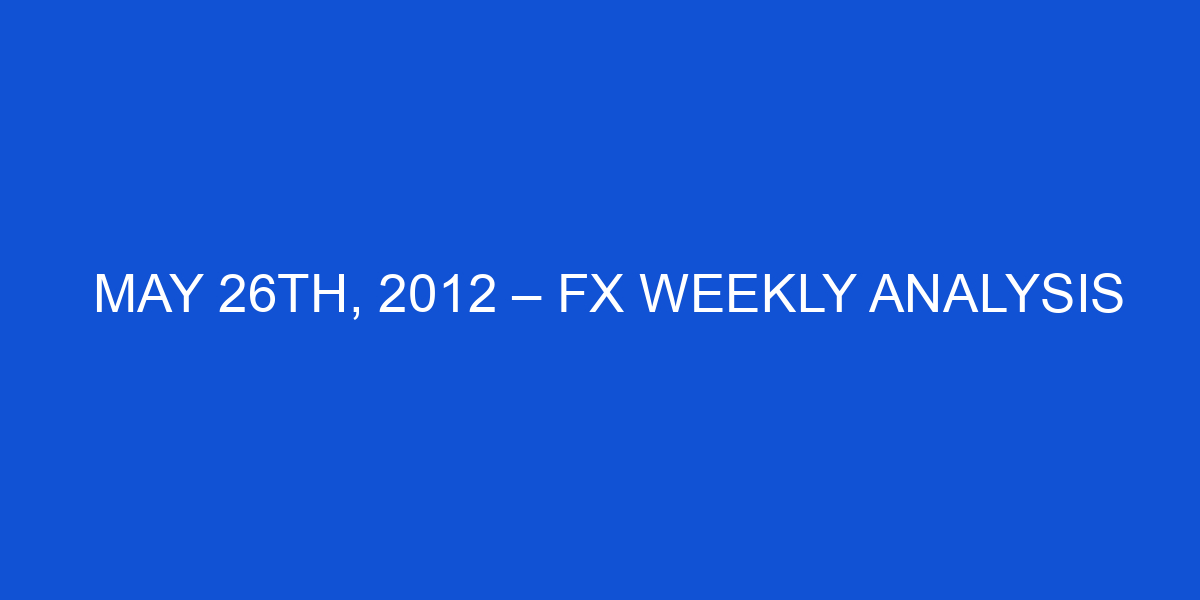 Guess last week’s “ranging” forecast ended up being a flop but I still think it’s going to happen soon. Price action did retrace a little bit as projected but it didn’t range, it just ended up breaking S/R levels and continuing in the overall direction. I guess all the big money favors US strength over Euro strength. It has to consolidate sooner or later though, so I’ll be forecasting the range again this week but it’s not that evident on the charts.

Something else worth mentioning as I got an email this week about this. I don’t follow news to the letter (although I probably should), these FX Weekly Analysis is purely based on my opinion from a technical point of view. I vaguely include the overall news of the Euro zone problems but I don’t let it influence these forecasts that much. Nor do I read other sites/forums/forecasts because that might bias my own opinion. So rest assure when you read my analysis, you’re only getting my opinion. Anyways onto this week’s analysis…

The primary chart of focus is the weekly chart this week, look at all the trendlines and S/R levels that have been broken so far. No retraces, pullbacks or weak breaks, all of them broke pretty nicely. The projected movement is drawn on the H4 chart though, I realized it’s pretty much pointless to draw on daily or weekly charts because I can’t project that far ahead.

USD/CAD [Long/R (C)]: As mentioned last week, all the higher timeframes have already broken the monthly downward trendlines except for the H4 chart. That was the focus of this week’s price action and both monthly downward trendlines were broken this week. However, we’re now at a new weekly resistance level and if price can break into this area, it could open up a new ranging channel between this 1.03 level up to 1.07 monthly resistance level. Otherwise on the downside, there are the monthly trendlines and weekly support levels for the lower ranging channel. This weekly resistance is the condition in play for the up and down side action for this week.

AUD/USD [Short/R (C)]: The lowest point AUD/USD has been within the past year is the 94 cent level. Beyond that, this can drop like a rock down to the 80′s or even 70 cent regions. Otherwise if you look at the weekly candle wicks of the two previous lows, the area between here and 94 cents is a potential range or bounce point for price action. The daily chart has a few more support levels below but they aren’t visible on the charts because I’d have to zoom out a lot since the chart is already at the bottom right now. Breaking these supports will enter into the 94-97 range or bouncing off of them to get back up to test the weekly trendlines. Thus, daily support levels and the weekly wicks are the conditions in play this week.

EUR/USD [Short/R (C)]: Last week, I mentioned this was the most important forecast to watch due to the monthly support level. Well, that level was broken this week (assuming I drew it right now), this area in general is “overall support”. There’s still a weekly support level below the current price though (just drew it this week). Breaking the monthly support means a lot but we’ll have to see what happens this week to determine the coming weeks of action. If we bounce up this week, it could be a sign of hope for bulls due to a potential bounce and/or range. If it ranges, that could possibly form a bear flag signalling consolidation before dropping some more. Conditions on the weekly/monthly support levels and what happens here and now.

GBP/USD [Short/R (C)]: This is now in the same position as USD/CAD was last week. Higher timeframes show the monthly trendlines broken but H4 is still sitting on the upward monthly trendline. If H4 monthly trendline is broke, it also means the daily support level will break as well. After this breaks, there’s a gap down to the 1.54 level, this gap represents an old ranging channel from late last year. So in a sense, this is a combination of USD/CAD and AUD/USD forecasts into one. Definitely going to be an interesting week to watch this one as it breaks back into the old descending/symmetrical triangle from the last couple years.

In summary, all the pairs could potentially be entering into a consolidation channel since each forecast talks about a “range” of S/R levels that can house the price action in the coming weeks.