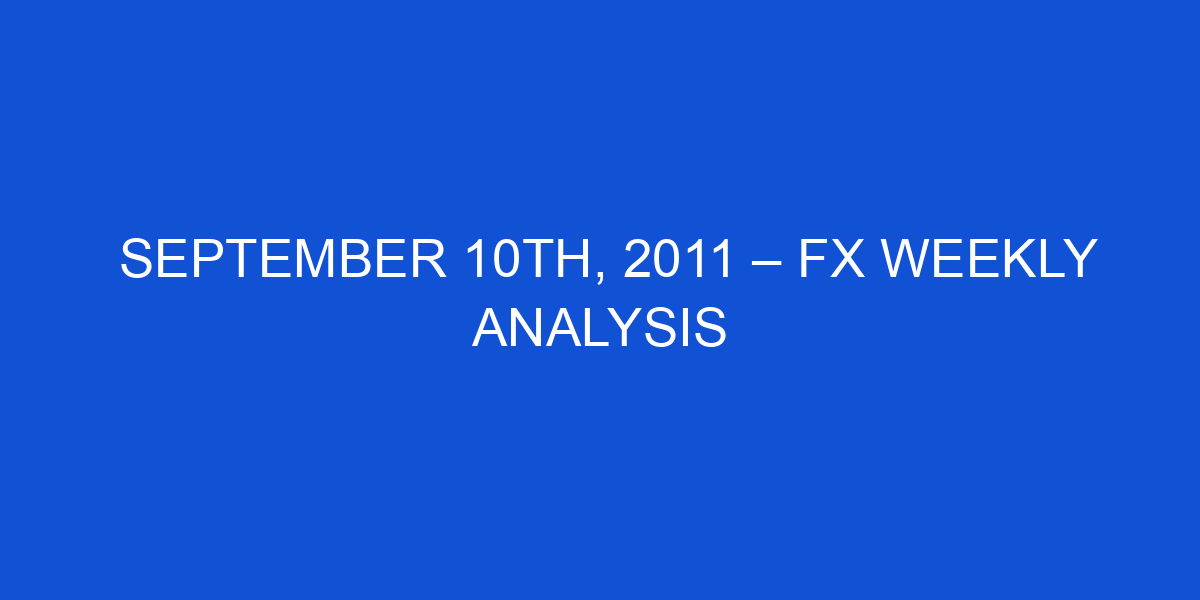 This week was one of those special weeks with huge movers. Obama’s jobs plan, Bernanke spoke, employment data came out for AUD and CAD. Since I don’t know much about FA, I’ll just shut up and move onto the results and my analysis! Would’ve been a fun week to trade. EUR/USD takes the crown this week for biggest mover, it dropped 5.46 cents (546 pips). I’m going to disregard the G7 meeting this weekend and ignore it and just go along with my TA as it stands.

This week’s results and the updated record chart

Reminder: I didn’t forecast AUD/USD last week because it was sitting on the daily and weekly TL.

Commentary on this week’s price action

Earlier this week, I posted about EUR/CHF being raised to a min. exchange rate by the SNB. Aside from this anomaly, price was overall pretty smooth across the EUR pairs. That news caused all the pairs to spike up like crazy.

USD/CAD – So, last week the bottom line of the flag held, and I commented on that and forecasted it to break this week which it did. Currently sitting on the weekly resistance point from the previous high formed from the initial bounce from .95 levels. Given USD strength, should be good going forward (up) to continue forming another potential flag or a general uptrend.

AUD/USD – Broke the daily and weekly TLs, then entered into a consolidation zone between the 2x H4 S/R channels, before breaking out of it on Friday. Currently sitting near the middle monthly TL.

GBP/USD – Broke weekly TL and daily support, I don’t emphasize much on the daily supports since I draw them all over the place for S/R levels for bounces but the weekly TL broke.

EUR/USD – Broke weekly upward TL and daily support / downward channel TL. So, a potential breakout of channel forming? Usually goes hard if it breaks out of a channel (and seen given those huge red bars).

EUR/GBP – Until Thurs, this was keeping to my forecast, it did go up and followed the H1 upward TL. Currently sitting on the monthly TL but already broke the weekly support and TL, so things are looking south now given EUR weakness seen acros the board.

I need to find a longer timeframe chart though to see the past decade worth of data instead of what I have now from Oanda to be sure of all these big S/R levels.

USD/CAD [Long] – The bullish flag formation was good, held nicely and price broke up above the top edge of the flag, but currently sitting at the previous high of the flag pole of the formation. Given USD strength (from EUR/USD), that should be enough to help push USD/CAD above par and is also exactly what Canada needs to maintain a stable GDP given that majority of our exports go to the US and given the high loonie, I would’ve expected exports to drop, so this will be good.

AUD/USD [Short] – Overall USD strength should give this a small push below the monthly TL and if it gets to triggered levels below, it can drop just like EUR/USD did.

GBP/USD [Short] – Given weekly TL being broken, I see this finally dropping towards the monthly support.

EUR/USD [Short] – Given weekly TL being broken, I see this finally dropping towards the monthly support.

EUR/GBP [Short] – Given weekly TL being broken, I see this dropping towards the monthly TL.

EUR/JPY [Short] – Still in the downward channel, but don’t want to forecast long, and rather just correlate it to the other two EUR pairs. Breaking the weekly support could send this one way south.

Between USD/CAD and EUR/USD, the chart looks primed to repeat what happened in the 2008 recession, should it follow thru, that may be a leading indicator to what we should expect in 2012.. another recession. Which may get delayed since US elections are coming up, so we’ll see what happens but this would be a forecast for next year, which is not something I’m capable of doing right now. So I’ll just leave it at that, until next week, GL and happy trading!