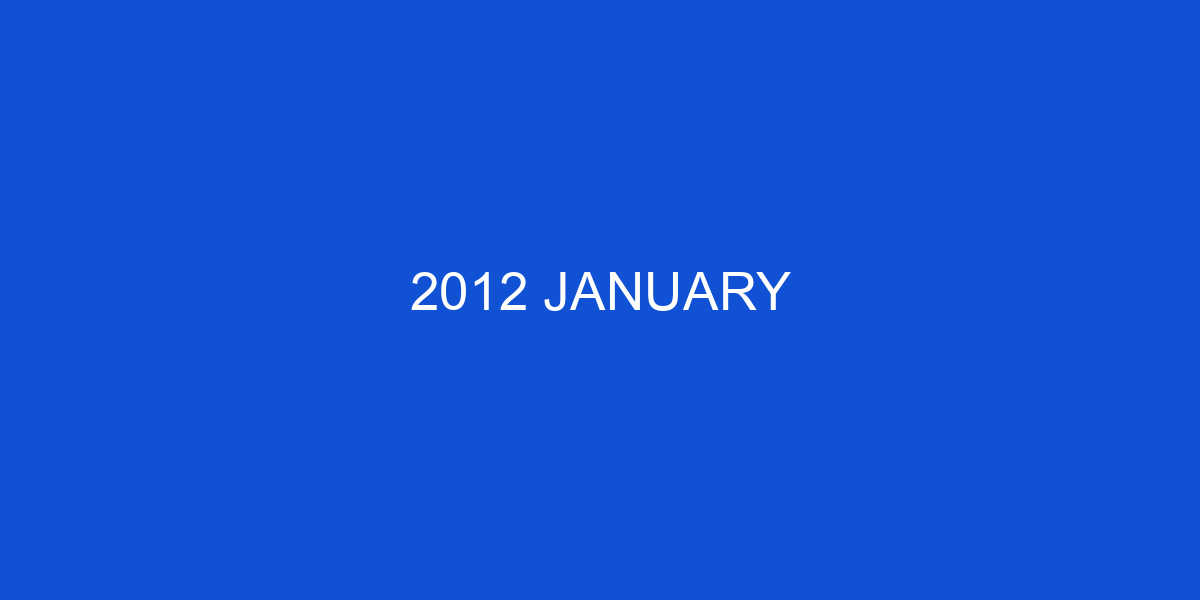 Sorry for the delay, I didn’t have time last night to do this week’s FX Weekly Analysis since I wanted to produce ep 12 and 13 of the video series. So, this will be the start of a new year of FX analysis, for those of you that haven’t read these before.

Basically, every Saturday (usually) or Sunday Morning (for exceptions like this), I write up a FX Weekly Analysis on selected FX pairs. I comment on previous weeks price action, potential patterns forming and my forecasts of what I think will happen. Last year, I started off covering 6 FX pairs in July, 2011, throughout the year, I stopped doing analysis on EUR/GBP and EUR/JPY because quite frankly, I don’t know much about their economies. Also, beceause my win ratios on those pairs weren’t that great. I’ve posted my ending result of last year’s FX Weekly Analysis below:

This year, I will focus on 4 FX pairs only: AUD/USD, EUR/USD, GBP/USD and USD/CAD. Last year, I ended up with a 65.42% win ratio on my forecasts, I simply forecast direction and sometimes pattern breakouts/fails. For the most part, I count a win/loss the same way as binary options, so in a sense, these are “Weekly Binary Options”. I’m aware a few brokers offer an instrument to trade these, but I haven’t had time to check that out yet.

Technically speaking, given the win ratio, I could profit from it, you could as well. BUT if you’re trading these, I’m not taking responsibility for anything. These are simply “big picture” forecasts that help when you’re trading. For example, if you’ve watched episode 5, where I cover “big picture” charting. If you know it’s going to be choppy this week or testing S/R levels, you can get into the ranging or trending market mindset.

Anyways, enough of that! Onto the actual analysis! Starting with the new forecast spreadsheet, followed by my charts and then the commentary/technical forecasts!

BEWARE, disconnected trending right now. Euro is it’s own pile of shit right now, along with the pound. Either they ditched the AUD/USD or the AUD/USD ditched them. We’ll see what happens!

NOTE: I will be using conditional forecasts again, these are used when there’s no clear direction to the FX pair. i.e. when there’s a pattern formed or it’s nearing a S/R level. My forecasts are based on the reaction of these levels. Wether they hold or break determine whether or not I was right. I’ll count win/loss by whether or not it followed my forecast or not. i.e. if it ends up being choppy and ends up on the right/wrong side, that’s a neligible win/loss.

AUD/USD [Long (C)]: H4 chart shows an ascending triangle forming, but there’s a weekly TL right above the breakout point, so this is very conditional on that weekly TL. Short term, I like this breaking up, given the previous week’s pinbars formed to represent buyers, so they could push price up, but up to which point is the question.

EUR/USD [Short (C)]: As seen on all charts, there’s a downward channel formed. But, on the monthly chart, it’s currently bouncing off near monthly support levels, this monthly candle is now 2 weeks into formation, so we have 2 weeks left for it to close. The question is where? Basically, flirting with that support level is the next step. Breaching doesn’t mean much, just means the buyers are caught off caught. Breaching and closing below means more down to come. The next monthly support level is 700 pips down.

GBP/USD [Short (C)]: Sort of a descending triangle forming, but overall, downward momentum anyways. Downward channel on the monthly, weekly and daily charts, various ways to draw the channel line, conditional on breaking support or not, if it does, more down to come given the shit storm in Europe.

USD/CAD [Short (C)]: Descending triangle formed on the H4 chart, this is a short term play. The overall daily/weekly charts show a symmetrical triangle, so it can go both ways. Question is, will the short term pattern lead/affect the long term pattern? In order to break the support of the descending triangle, it must first break down through the bottom TL of the symmetrical triangle, leading to a domino affect of the Canadian dollar gaining strength again. Good for consumer buying, but bad for the economy. Exports may take a hit again.