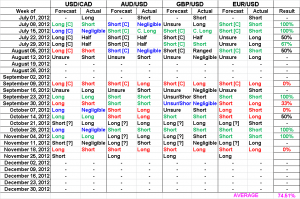 Well, this week was horribly bad for my forecasts. Usually, it’s quite rare that I’m completely wrong across the board…

I was originally going to forecast another 2 weeks as I announced in the forecast last week. But given the 0% week, I’ve decided that this will be the last forecast I’m making for this year. 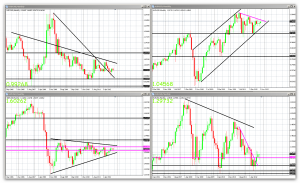 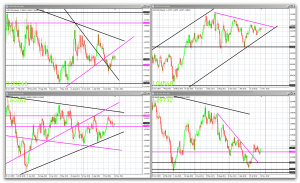 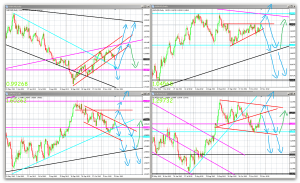 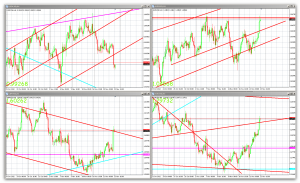 As you’ll notice, the projections are drawn on the daily chart this week instead of the H4 chart. This is being done because the “big picture” isn’t easy to illustrate on the H4 chart. I figure I might as well just draw the short term (next week) and long term (December and January) projections on the same chart to make it easier.

USD/CAD [Short]: Broke the upward trend line with a strong close, so it’s likely to continue down short term to test the lower support levels before possibly bouncing back up towards the end of the year.

AUD/USD [Long]: Guess my “hunch” last week was right, news spike broke outside of the trend line then it just went back inside this week and surged upwards. Currently, looking at an ascending triangle which will likely break out based on this week’s momentum. It’ll only travel up 100-200 pips though until it meets the weekly trend line for resistance, where I’m guessing it’ll bounce down towards the end of the year.

EUR/USD [Long]: There appears to be a channel now which can be seen clearly from the daily chart. Despite there being a trend line that might act as resistance, price already broke it this week. So this will probably continue upwards short term to meet the upper channel line before bouncing down towards the end of the year.

GBP/USD [Long]: This one is the correlation forecast this week, I’ve drawn potential targets for price to hit if it goes up. Comparing proportionately to the other pairs, the H4 resistance is a likely target with a possibility of hitting the weekly resistance as well in the short term. Afterwards, depending on which resistance is hit, price is probably going to bounce down towards the end of the year.

So this concludes the last weekly forecast that will be made in year 2012. Next Saturday, I’ll be back concluding what happened with next week’s forecast along with an overall summary of the forecasts in year 2012. But based on the results so far, I’ve improved in accuracy in comparison to the 6 months of FX Weekly Analysis in year 2011.

Until next week, trade safe!