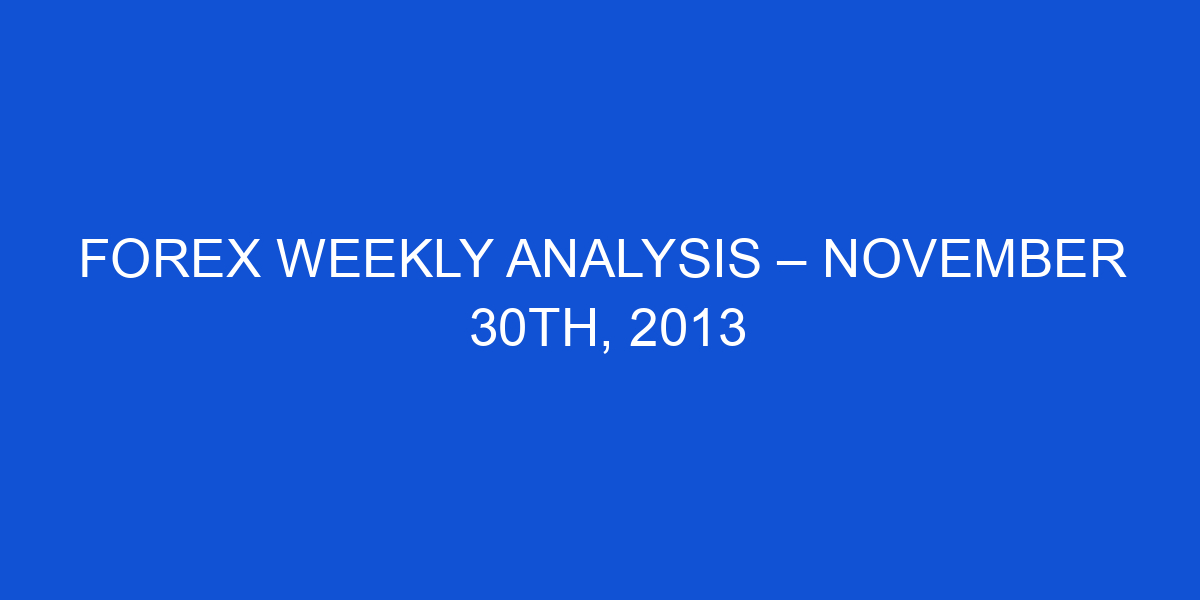 Welcome to the last FX Weekly Analysis of 2013!

This is a special analysis since it will be the last one for 2013, so I’ll be recapping all the major moves this year and what we can expect to see in 2014. However, this week’s analysis will be presented in written form rather than video form because I’m sick to the point that I’ve lost my voice (for the second time this year). I don’t get sick often but when I do, it’s pretty bad. The last time I was sick, I couldn’t get out of bed; at least this time I’m able to sit here to type up the analysis =).

Disclaimer: Although I do not have any open positions at this time, I may take trading positions throughout the week without notice. So take this into consideration when reading my FX Analysis as I may be biased in my forecast/analysis.

Before I get started, I just want to take a moment to talk about my long term forecasts. For those of you who’ve been following my analysis for a while now, you’ll know these don’t change often. The reason being is because they’re based on long term levels.

USD/CAD and AUD/USD for the most part just move based on how their economies are doing. While EUR/USD and GBP/USD have been trending down for the past few years ever since the 2008 financial crisis. In the long term, both Canada and Australia benefit from a weak currency since it helps their exports. Exchange rates 101, if you have a weak currency, other countries see your products (exports) as cheap goods so they’ll import it into their countries. The US is Canada’s biggest trading partner just like China is the biggest trading partner for Australia, so both power houses are encouraged to continue importing goods as long as there’s a weak currency. Higher exports lead to better GDP numbers for Canada and Australia.

Given the recent rally of EUR/USD and GBP/USD, I’m not sure if these economies benefit from a strong currency in the long run. Although the UK is a powerhouse in it’s own right, which is why it kept it’s own currency rather than switching to the Euro. It still resides in Europe and trades along side the EUR/USD. Doing a direct correlation (e.g., looking at EUR/GBP) shows the EUR losing strength while the GBP gaining strength over the past several years. For those of you new to cross pairs, if EUR/GBP goes down. It means EUR is losing strength and GBP is gaining strength. In the long run, I guess this would be beneficial to the EUR considering a weak currency would encourage tourism but I’m not sure what to make of GBP strength.

Given what I stated above given the long term forecast, I think this should be pretty self explanatory. However, we are currently sitting at 2012/2013 resistance, so don’t be surprised if we get an initial down move / pullback before the eventual burst through resistance, aiming for higher levels like the 1.085 level from 2010.

Given what I stated above given the long term forecast, I think this should be pretty self explanatory. However, we are currently sitting at the bottom downward trend line, so price could very well bounce up / pullback up to the 0.93 level before continue the onslaught downwards.

Given what I stated above given the long term forecast, I think this should be pretty self explanatory. However, price bounced off of the 61.8 fib level this week, so is this a signal for what’s to come in the next couple weeks? It’s also sitting at the trend line that it broke on it’s way down. So if the trend line and fib level holds, price may very well just continue to drop from here.

Given what I stated above given the long term forecast, I think this should be pretty self explanatory. Since the long term forecast is unsure, this pair will be tricky for the coming weeks until we get confirmation on long term charts. We already have closes above the 1.63 level across the board, so short term indicates confirmation for more upside power. However, we’re in a sticky situation because markets take a while before they change their long term trends, the downward trend line stretches back to 2009. So I’m not sure if one week of bull movement can overpower a 4 year trend. So trade this pair with extreme prejudice in the coming weeks, I’ll hopefully have a long term forecast by the time we start again in 6 weeks.

PS: Due to being sick, I didn’t bother to edit this, so I hope you can overlook the grammar and spelling mistakes (if any) or if something just doesn’t make sense at all… This actually took me about 2 hours to write up, probably would’ve been faster if I was talking and wasn’t sick.