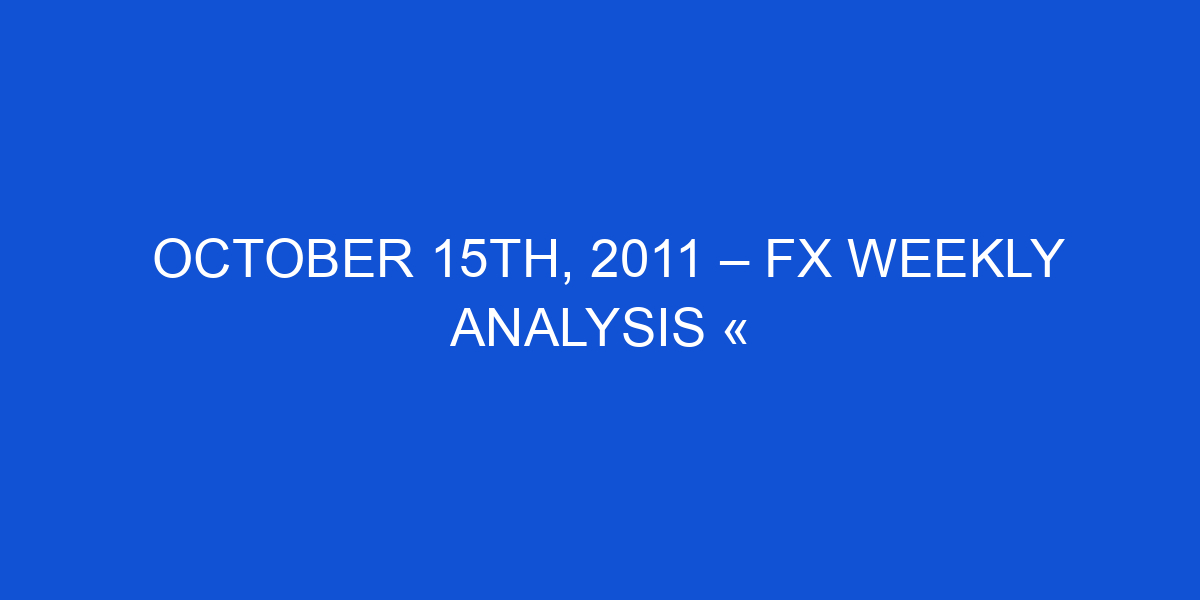 Horrible week, holy shit, this is what happens when you blindly make forecasts without looking at anything. I apologize for last week, and even this week. It’s midterm season and I’m getting swamped with readings and shit to catch up on. Since I was trading pretty much full time up till last week so I wasn’t doing much school work. So since I quit till now, I’ve just been catching up on school work and I’m still not done. I have good self control though, didn’t open a single chart this week till now to do the weekly forecasts and yes, it’s delayed. I was in the middle of reading a chapter last night so I didn’t want to interrupt my studies to make the forecasts, so here it is.

So yea, last week was crap. My first 0% week in a long time, I hope no one traded based on it… if you noticed, I didn’t even draw any new trendlines on last week’s forecasts but this week’s forecasts I have. So take a look, overall, in the grand scheme of things, a bull run was inevitable. Bears can’t take over forever, they get tired then let bulls take it,but I see potential reversal points this week for bulls then bears are back in action!

I forgot to enter trades on the demo account for this week.. so I can’t show that. Also, I’m removing the H1 (hourly) charts because I find those are useless for weekly forecasts, because given the small windows that I see, hourly doesn’t cover that many days. At least with H4, you can see about 3-4 weeks worth. Hourly only shows the one week which does nothing for forecasting the next week. Need to have comparative weeks to see the direction (I think anyways).

PS: In all honesty, the way the finance game works is that, everyone throws out their forecasts to the world then whoever gets it right gets bragging rights. That’s it, you look on the news, you get economists, wall street people, prop traders etc all forecasting different things. One group of people will get it right then get in the spot line. They get to brag about how they predicted something happened etc. That’s basically what I’m doing here lol, and so far, I’m not right all the time, but I’m right most of the time showing that technical analysis isn’t completely useless.

Weird weekly forecasts this week since most of the plays will meet their reversal/support/resistance points mid week, so it’s hard to forecast the end result, so I’m giving conditions to each one. I’ll forecast the action and thus validate the conditions, not just blindly writing them as insurance policy on my forecasts.

USD/CAD [Long (C)]: Look at the weekly chart, USD/CAD bounced between the two pink lines for a long time before breaking up or down. The condition comes into play if USD/CAD drops to lower boundary then bounces up, we could very well just drop down to lower boundary then stay there and bounce next week instead. Lastly, downward channels are not sustainable on H4, they have to break sooner or later.

AUD/USD [Short (C)]: Probably one of the rare occasions that I draw fibs, this is the most interesting pair this week. H4 big downward channel (for overall trend trading) + daily resistance + 61.8 fib level, assuming all hold, we’ll tank after hitting one of them since they’re not intersecting, it’ll hit one only and the strongest one will reject it (condition). Lastly, upward channels are not sustainable on H4, they have to break sooner or later.

GBP/USD [Short (C)]: HUGE bearish gartely forming, which kind of makes me want to go long on this one instead since the gartely is projecting all the way up to the start of the last H4 downward channel. But, I’ll just stick to correlating this with EUR/USD. Lastly, upward channels are not sustainable on H4, they have to break sooner or later.

EUR/USD [Short (C)]: Again, rare to see me draw fibs, ironically, the 61.8 fib is at 1.4020, incredibly close to the 1.4 psychological level. The round numbers are what most institutional traders play. They don’t give a fuck about 1.42846 (random numbers), they like round numbers.Assuming the fib holds, we’ll likely tank or consolidate from there. That’s the condition for this week + a daily resistance past the fib as well. Lastly, upward channels are not sustainable on H4, they have to break sooner or later.

EUR/JPY [Short (C)]: I may cut this one from my forecasts, I don’t follow JPY, I just simply correlate this one to EUR/USD since they follow closely. Unlike EUR/GBP which has a mind of it’s own, but we’ll see what happens. Lastly, upward channels are not sustainable on H4, they have to break sooner or later.